Alexa is Amazon’s voice controlled service on many devices like Echo, Echo Dot, and Echo Show. Alexa provides capabilities or skills to create a more personalised experience. The integrations keep coming, at such pace it’s hard to know exactly which products/services will work with it. Alexa provides features which include:

We joined Capgemini as members of the first Summer Intern programme based out of Telford, UK. Shortly after our induction we had been given the task of creating cloud Infrastructure in AWS using an Alexa enabled device, admittedly this was an open-ended task which could be tackled in different ways, but we were trusted enough as young professionals to be given free rein on how we would tackle this task.

We relished the challenge at hand and saw it as a unique opportunity to learn some new technologies and services, which would otherwise not have been exposed to us, had we not undertaken this internship.

We spent our first week getting familiar with the new technologies and tools that are required to complete this project, in addition to collecting functional and non-functional requirements from stakeholders, allowing us to scope out the required work using a Trello board with a Kanban agile model. The Trello board allowed us to easily track and delegate work to each other, whilst providing a highly readable overview of the project. 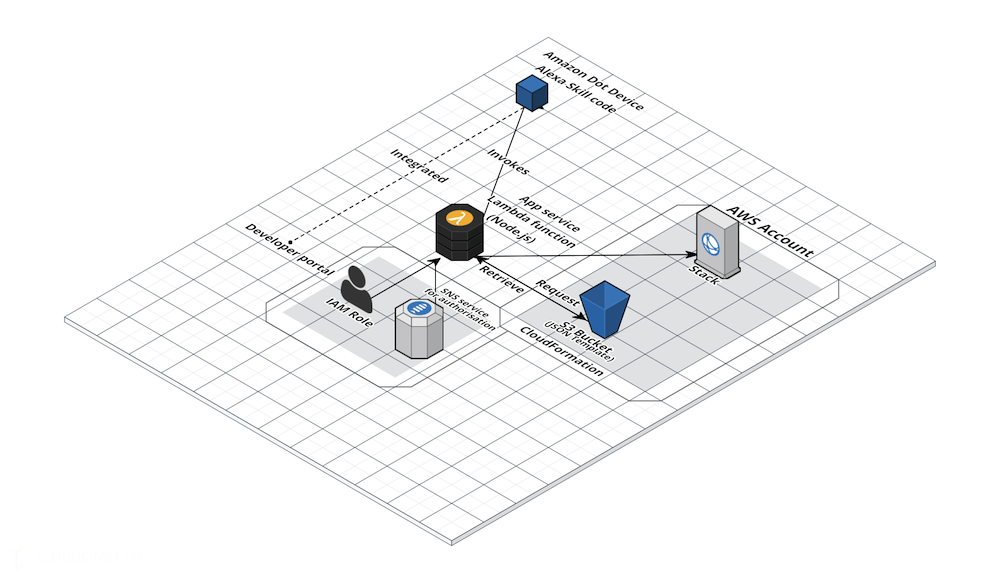 When deciding on how we would handle the integration of the Alexa Skill to AWS services, we settled on using AWS Lambda over other alternative solutions such as Elastic Beanstalk; due to its serverless platform and ease of implementation.

We developed the Lambda component of the skill concurrently in NodeJS and Python with both versions providing identical functionality, due to members of the team having varying skill sets and specialisation.

Detailed below is how the Alexa skill will integrate with the Lambda function.

Agile is an iterative process so we developed an MVP (to be presented to stakeholders) for the Alexa skill which uses voice activated commands to create cloud infrastructure from CloudFormation template files, which can be either written in JSON or YAML. When instantiated these templates create CloudFormation Stacks.

These are generic actions which incur a negligible cost or are free (Allocated a monthly allowance of free access to services required to run actions). 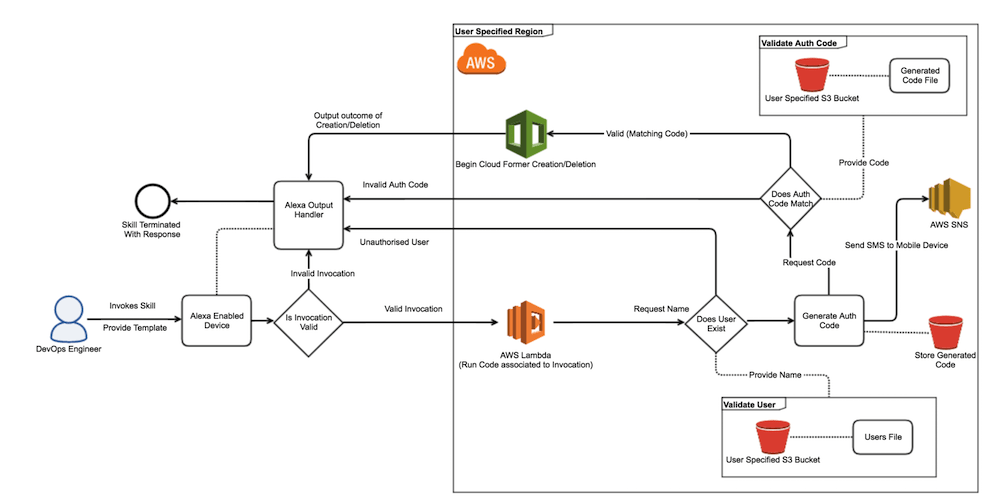 Each action which requires authentication needs to prompt for the username and a passcode which can be elicited from the user in the form of a slot from an Alexa enabled device. These privileged actions (create/delete cloud infrastructure) have an authentication layer wrapped around them. We looked at various options such as QR codes and access credentials. A decision was made to use one time passwords (OTP) which would be sent to an authenticated users mobile device. The user speaks the code to Alexa, and Alexa validates that code is correct and either allows or rejects the action.

A decision was made not to make skill session based, as that would grant access to the skill for large periods of time, instead the user is required to follow the authentication model each time they want to execute a privileged action; this prevents bad actors from interjecting and running commands as the user.

The code can be found in our GitHub repository.

The solution was developed with scalability and future development in mind, this was achieved by following a modular approach, which allows for modules to be interchanged easily should a better approach be found.

This section will represent the basic functions used for individual components in the development of the project. There are many functions involved to incorporate different features to Alexa with specific conversations. To make it easy, we have declared all the constant variables at the top of the script to change the values according to the requirement. We want to portray the main features in a sequential way dividing into appropriate snippets which follows as:

These are the main intents used in the script which will be discussed below in detail.

1. Dependencies and package library: CloudFormer requires that the dependencies outlined below in the code snippet be included for the skill to function correctly. The cloudformer-node package has been forked and tweaked (the forked repository can be found here, all the other packages are used as it is.

2. CloudFormerCreateIntent: The create action requires elevated privileges which can only be obtained if the user is authorised by an administrator. This works by specifying the option number of the stack, which the user requests to be created. In the event that the user is authenticated the stack is created, otherwise an access denied message is returned by Alexa.

3. CloudFormerDeleteIntent: The delete action also requires elevated privileges; this works by specifying the option number of the stack which the user requests to be deleted. In the event that the user is authenticated the stack is deleted, otherwise an access denied message is returned by Alexa.

4. CloudFormerListTemplateIntent: The ListTemplate intent loops through the specified S3 Bucket in AWS and then Alexa outputs information about each CloudFormation Template (JSON and YAML) found within the bucket. Note, that the JavaScript Promise is used to ensure that the list of templates is returned for the intent to handle.

5. CloudFormerHelpIntent: The help intent has been designed so that it is similar to an expert system, as the majority of people would have prior experience using such a system; this allows for a user to intuitively follow through the intent to get whatever assistance they may require.

The other minor functions to have been included in the script are:

A global IAM role has been used with a custom policy with the minimum required permission on the AWS resources.

Want to see a live demonstration?

We will be demonstrating our Alexa VoiceOps solution at the Digital and DevOps Meetup in Birmingham on the 14th of September. See you there!

We’ve thoroughly enjoyed the project and the journey it has taken us on, during our short stint here at Capgemini; it has provided us with an invaluable insight into the processes and culture which the company prides itself upon. We highly recommend this summer programme to students who are passionate about Technology and Consulting. We look forward to gaining similar opportunities and continuing our journey with Cloud-based development projects in the near future.

There are a few additional features which we would have liked to implement had we had some more time, these can be found below.

We would personally like to thank our stakeholders and who were involved throughout the development of this project. We appreciate their consistent support and input.