In 2005 I went to my first JavaOne conference expecting something amazing to happen; something transformative even. Please don’t get me wrong, it was great. But by the end I was tired and overwhelmed. Some sessions had been amazing and inspiring, some hadn’t. Little did I know, a decade later, I’d be co-organising my own event: UnVoxxed - £125.00 for Early Bird, 15-16 June, London. But for the 2005-me, that was all a long way off.

At the good sessions, I’d desperately wanted to speak to the speakers afterwards – but these were inevitably the super-well-subscribed ones and the lines were long, and I’d not really had any idea what I wanted to say besides “thanks”; I bottled it every time, justifying this to myself by concluding this line was too long if I wasn’t to miss the next possibly great session.

So I just left everyone else to it, and went and sat in the next darkened room, looking at slides, and trying to take notes. 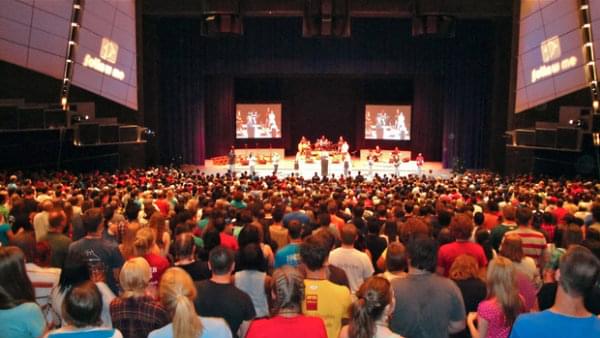 Back home, when I heard folks talk about conferences or read about their experiences, they always seemed to have had a different, more transformative experience to mine – it was all about the “hallway conversations” many of them said or wrote.

What conversations? I’d had none. I’d been too shy – too shy to even chat to the guy in front of me in the queue for free coffee. Perhaps if I had persisted and gone up to the front things might have been different. Was I consigned to just being a spectator? Was this all conferences had to offer me?

I refused to believe it. I was lucky enough to attend a few more JavaOne conferences, each time determined to break out of my shell a little more. But while I became more confident, the ideal circumstances for that golden interaction never presented themselves. I got a lot out of attending, but I was still a spectator, never a participant.

Then I went to the third Java Posse Roundup.

Rather than being hosted in Moscone, downtown San Francisco and attended by many thousands of attendees, the Roundup was in a church hall, in Crested Butte Colorado. On my first year, I think there were about 50 of us in attendance. More significantly, there were no pre-planned sessions, and no speakers. There were only attendees. Not only that, there wasn’t much in the way of organisation. That’s because it was self-organising. We were the organisers. 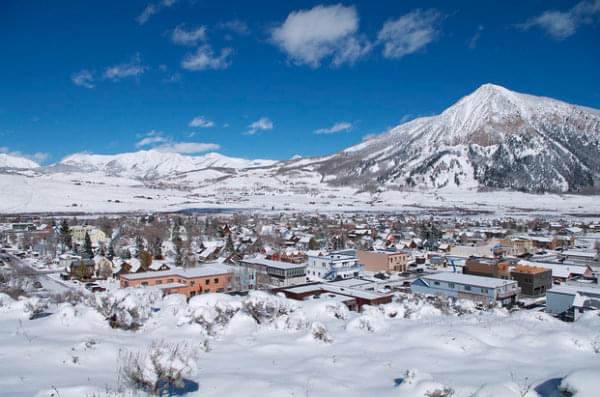 And it was phenomenal.

I initially still had my “fear” (Bruce Eckel reminded me later that I was incredibly quiet on the first few days) and whenever I opened my mouth to contribute my heart raced. But slowly, the fear drained away, to be replaced by excitement. If I recall correctly, by the third day I’d proposed my first session, but I’d also contributed – in small ways to begin with – to many more.

What had happened? The conference had made itself. There were folks who’d been there before, and folks who were new. The first day had been kicked off by Bruce with a quick intro to the “rules” and mechanics, and then we were off. Sessions were put on post-its and stuck on a pre-prepared grid cross-referencing venues and time (the venues were different rooms in the Church hall as well as the coffee shop across the street).

Just before the allotted session time, folks would head off to where the session they were interested in / had proposed was allocated. We’d then sit in a circle / semi circle / concentric circles (depending on the size of the group) and wait, perhaps introducing ourselves or chatting a little to pass the time. With all the usual paraphernalia of conferences removed, it was just a self-selected group of people with a shared purpose. 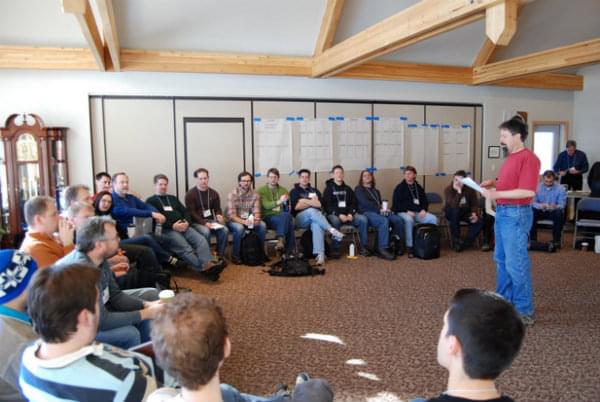 When a session began, the convener would introduce themselves, and then the topic, and perhaps talk for a few minutes, ad-libbing, to get things going. They’d then relinquish “control” and the discussion would start. There were no more “rules” aside from the “Law of Two Feet” – if you felt the session wasn’t for you, you were obliged to leave to avoid bringing down the energy – and “No Lecturing”. I never had to leave a single session in the entire week – things were too engaging. I never saw anyone lecture either – what would you gain when the contributions of the group were potentially so much richer?

How the conversations proceeded depended significantly on the folks present. Some had a interrogative style, others liked to offer experiences and anecdotes, others seemed to take on a role of natural facilitator, bringing things back to topic or re-energising things when they slacked off. Sometimes we would uncover a topic far bigger than had been anticipated by the proposer. When this happened we’d create a spin-off session and put it up on the board as another post-it. As the week progressed it became clear we’d achieved our goal – looking back at the board it was clear we’d built our own conference, and wow, what a conference we’d built. 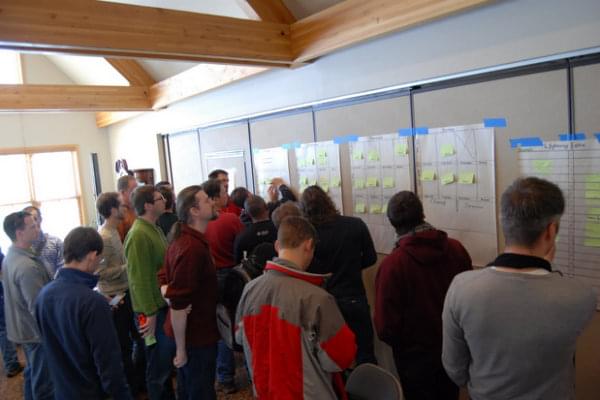 OK, so all of this is great, but it’s mostly just mechanics. Why did it change my life?

Well, firstly, it changed my life because a conversation is far more stimulating and engaging than a monologue. Everything else is stripped away – you must engage with the topic because there is nothing else.

Not only that, but you must engage with the conference because you are part of it. By engaging, I’d been forced to overcome my fear – it had happened because it just looked so damn exciting to contribute, and it was. I’d ended up interacting directly with some of the “famous” attendees, but I’d also had amazing conversations with folks just like me.

And in having these conversations, I’d realised that perhaps there was less separating the “famous” folks and the likes of the rest of us. These folks weren’t up on a stage any more. They were simply sitting on another church-hall chair, just like me, and we all treated each other as peers and co-contributors.

And that’s when an epiphany struck me – and this was the thing that really changed my life. Seeing the strengths and weaknesses of everyone present, and realising the myriad roles that can be played in this insane circus called Software Development – seeing that in some small areas there are valid and valuable things that I might be able to contribute – this changed my life forever.

I realised that aspect of the unconference I enjoyed the most was facilitating the conversations that we were having. And it’s because of this that last year I worked with Dick Wall, originator of the Java Posse Roundup to bring things to the UK, and it’s why we’re doing it again, under a different title, but with exactly the same ethos.

This year, on the 15th – 16th of June, Dick and I are putting on Unvoxxed, in association with Devoxx. The theme is “Programming at any Scale” and it’s in the Crypt on the Green, Clerkenwell, you can partake for the tiny sum of £125.00 for two days. I urge you to come. Trust me, its the best thing you’ll ever do. Oh, and if you quote the discount code “UNV1015” you’ll get a further £10 off the already ludicrously cheap price.

If you have any questions, please add a comment on this post, or ping me on twitter at @al94781 or @unvoxxed. Hopefully, we’ll see you there.