Apache NiFi is a visual data flow based system which performs data routing, transformation and system mediation logic on data between sources or endpoints.

NiFi was developed originally by the US National Security Agency. It was eventually made open source and released under the Apache Foundation in 2014. This has brought several advantages to the software, creating a large community user base providing support and regular updates.

I have found NiFi to be a particularly useful and rapid solution to apply to problems involving a flow of data from one or more endpoints to another that require some routing and manipulation or validation along the way. Most use cases require little to no coding, as all functionality is provided by the many bundled processors.

Each processor performs a specific given task. It is also possible to write your own processor using Java, or use one of the many written by the NiFi community.

NiFi supports a number of different endpoints including, but not limited to:

After following a few steps and navigating your browser to the default port 8080, you should be presented with the NiFi User Interface, which looks like the following:

This is a canvas where processors can be dragged and dropped and can be connected via flows to other processors and endpoints.

A processor in NiFi performs a discrete task and has one or more inputs or outputs. A freshly installed NiFi comes with a plethora of processors to choose from. We will use a few of these in the simple example flow later on in the post.

Other than inputs and outputs, each processor has settings, schedules and properties, which are unique to each processor and allow changing its behaviour.

An example of a processor may be GetSQL or PostHTTP - Processors are clearly named to describe the exact operation they perform.

A flow is what connects one processor to another processor, port or funnel, and works in one direction. A flow can be created by dragging a line on a canvas from one object to another.

Each flow has its own internal queue. This queue allows buffering to occur when the downstream process is slower, paused or stopped for whatever reason. Flow queue contents are stored as files on the NiFi server storage, so this needs to be taken into consideration when designing a flow. The queues parameters can be tweaked to allow a finite amount before either deletion, or back-pressure is applied. This post won’t go into either of these advanced topics but I may cover these at a later point.

Usually what happens when we are using a processor, is that each processor has been designed to have one input and more than one output, covering at least one success state and at least one failure state so data can be routed onwards appropriately.

A funnel is a conduit aid that allows many flows to converge into a single flow, which helps to ensure a clear layout when lots of flows all have the same fate.

To delve deeper into the processing group, double click to reveal its flow. Processor groups can be used effectively when dealing with large, complex flows that have several discrete functions, utilising a processing group for each function.

Processor groups use ports to terminate the internal flows and allow them to be accessed outside the process group. A processor group typically has at least one input and one output port.

A NiFi flow transports data from the start to the end of the flow in chunked file content known in NiFi as Flow Files which, by default uses the storage media where NiFi has been installed as a mechanism.

A Flow File consists of Flow File Content and Flow File Attributes. Flow File Content is the entire content of the data of the file, for example the contents of a text file. The Flow File Attributes are metadata attached to each flow file, represented in key value pairs. These attributes are sometimes set by processors themselves, to indicate certain properties or status of a flowfile, but can also be manipulated by the flow designer themselves (This is covered later). 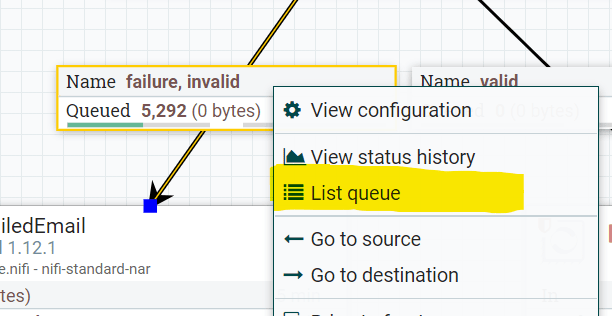 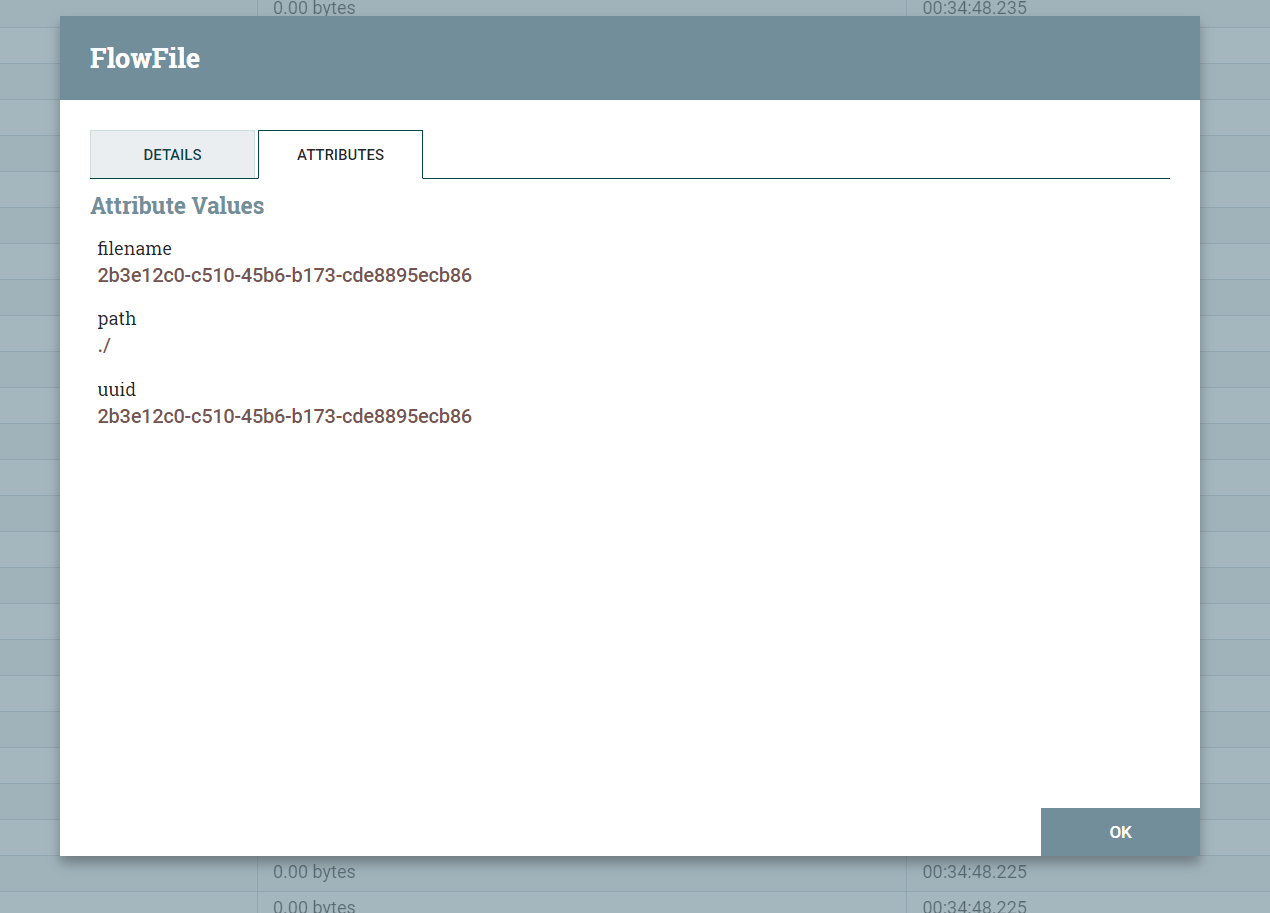 Let’s have a go at creating a flow to solve a (very simple) problem. I have a dataset of files in a directory that is populated from some external system. I want these files sorted and placed into different folders based on their content.

These files could really be any format but I have picked files containing JSON file content. This is just random data I have created.

I want these files to be placed into two different directories, current and savings based on their accountType. The first thing we need to do is to add a processor which will read the files in a directory and turn them into flow files. I have used the GetFile processor to do this. Drag the processor symbol in NiFi to add this processor. Once added to the canvas, set the processor properties to similar values to scan an input directory for JSON files: 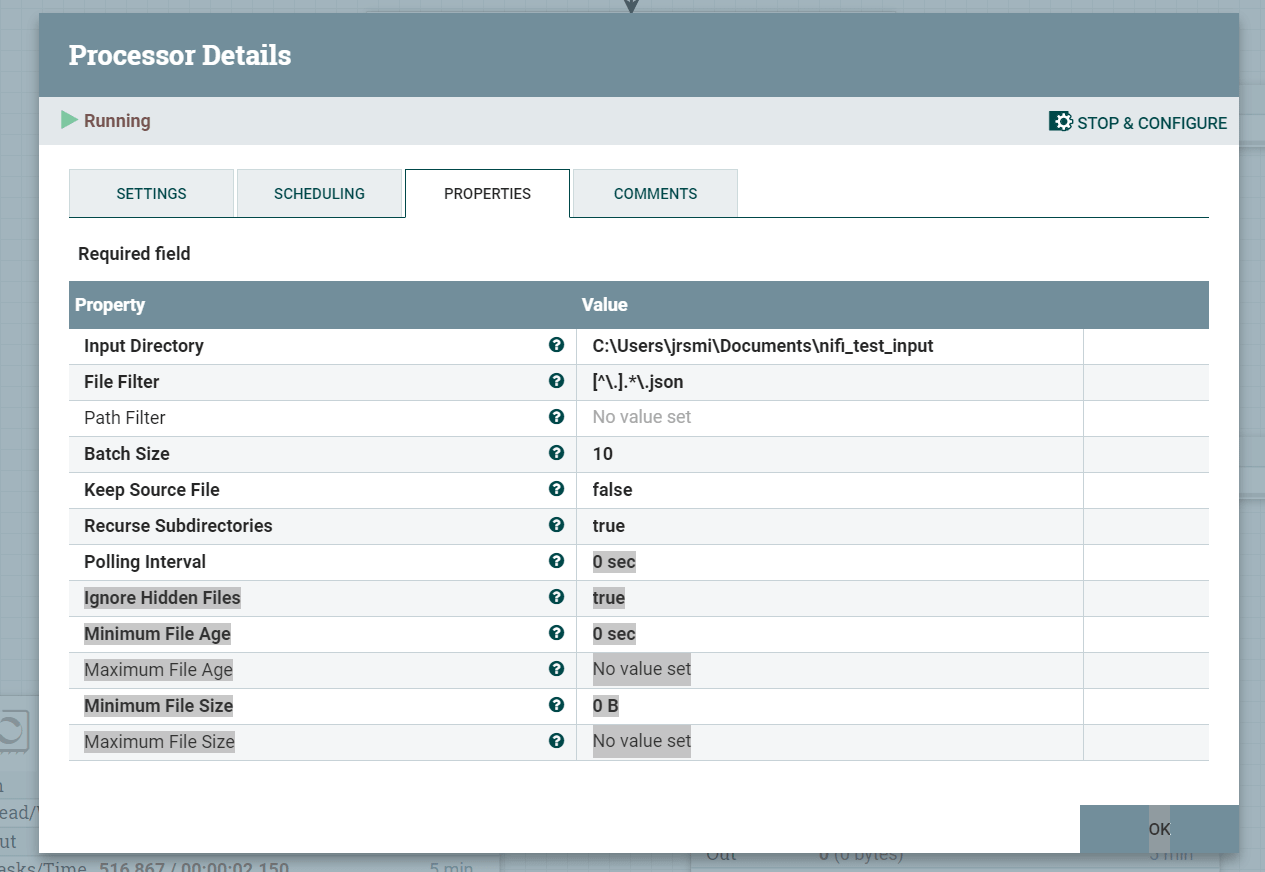 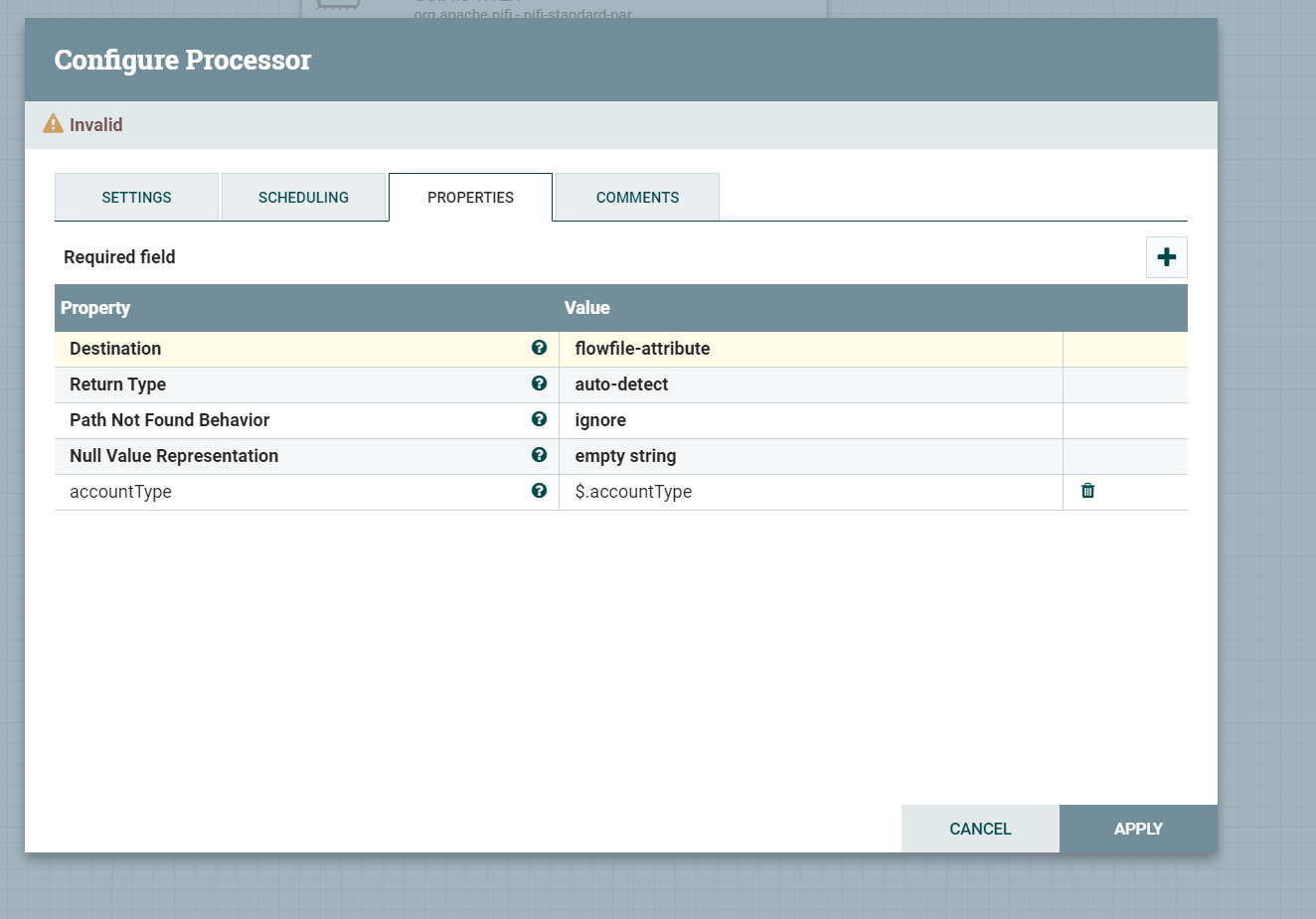 This processor supports addition of custom properties to be able to read custom defined JSON parameters to extract. Add the property name and value above to extract the account Type JSON value from the file into a Flow File Attribute called accountType. The “$.accountType” Is JSONPATH syntax for grabbing a key called accountType from the root JSON node.

Next we need to be able to route our logic based on the accountType flow attribute. To do this we need to use the RouteOnAttributeProcessor. Add this to the canvas and add the following properties: 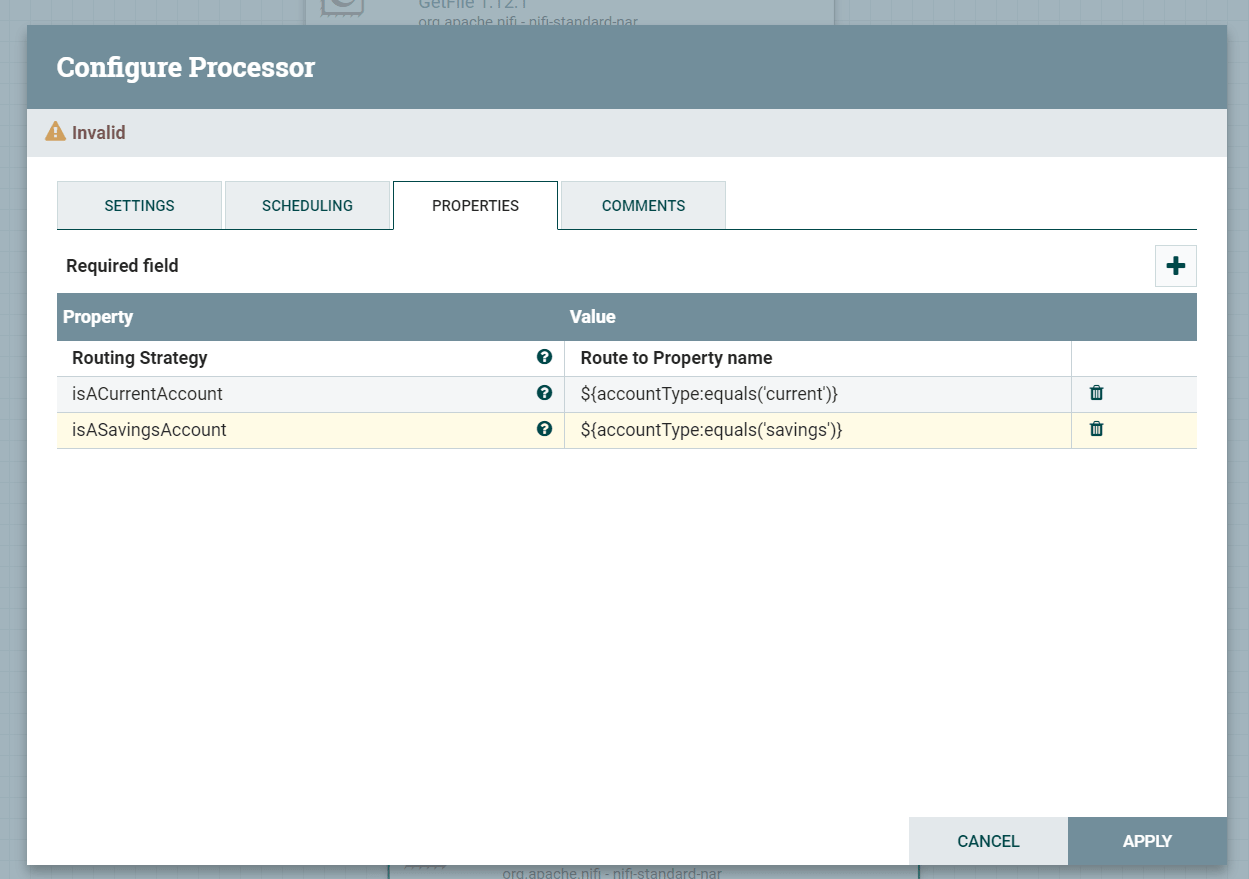 The values for the additional properties make use of something called NiFi expression language, which we will touch upon later, but this is a way of routing to the two different routes based on the setting of accountType.

Now that the routing logic is present, we need to add a way of writing the flow files to a folder on the storage. To do this we use a PutFile processor.

Set the properties similar to the below. Note that we will need two of these, one for savings and one for the current account type. 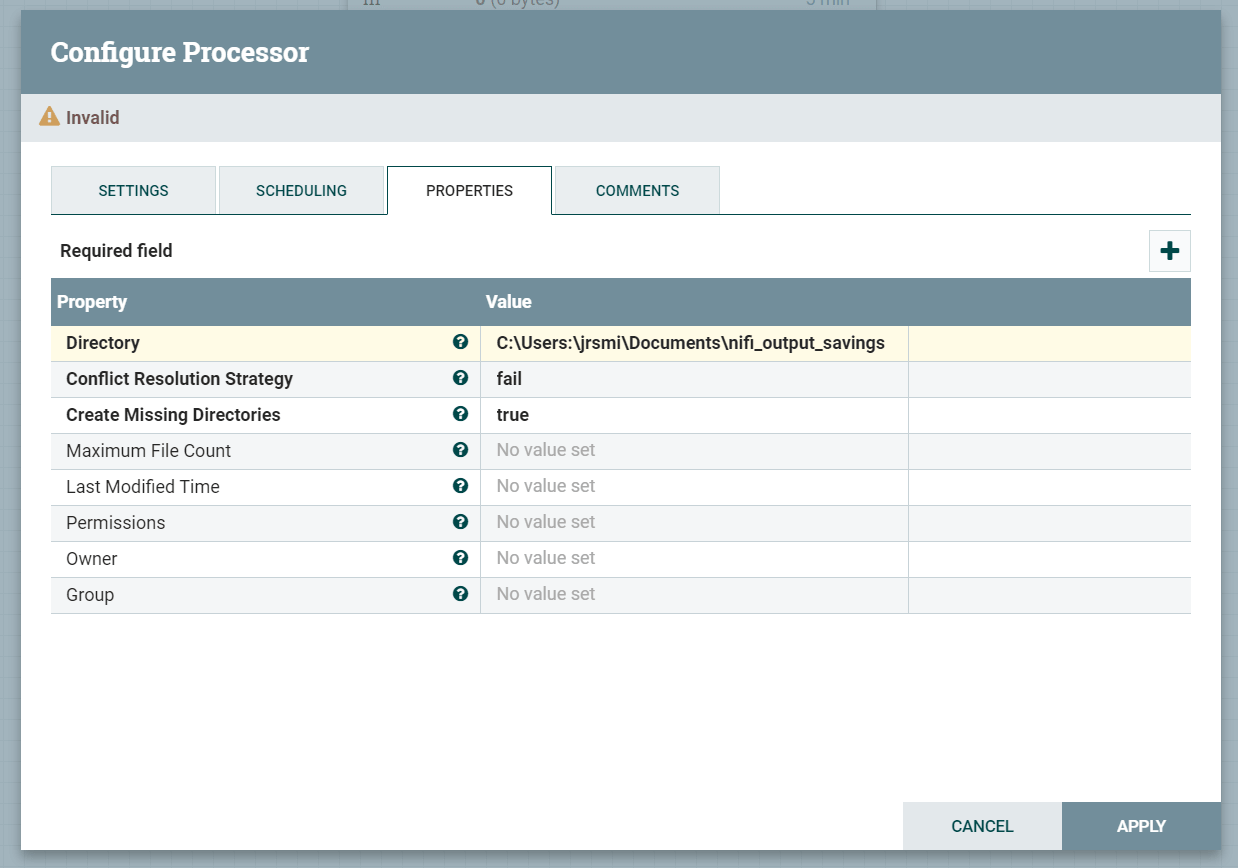 All we need to do now is connect the processors up with flows. Simply drag a line from each processor to the next to create a flow for each success and failure state.

It is good practice to use funnels as a way to extract out terminal flow queues from the flow. E.g. any failures from individual processors and the final success state from the end of the flow.

In the end, your flow should look something like this. If there are no errors a stop symbol will be displayed next to each processor (if you get a warning, hover over the symbol and remediate the issue that is stated). 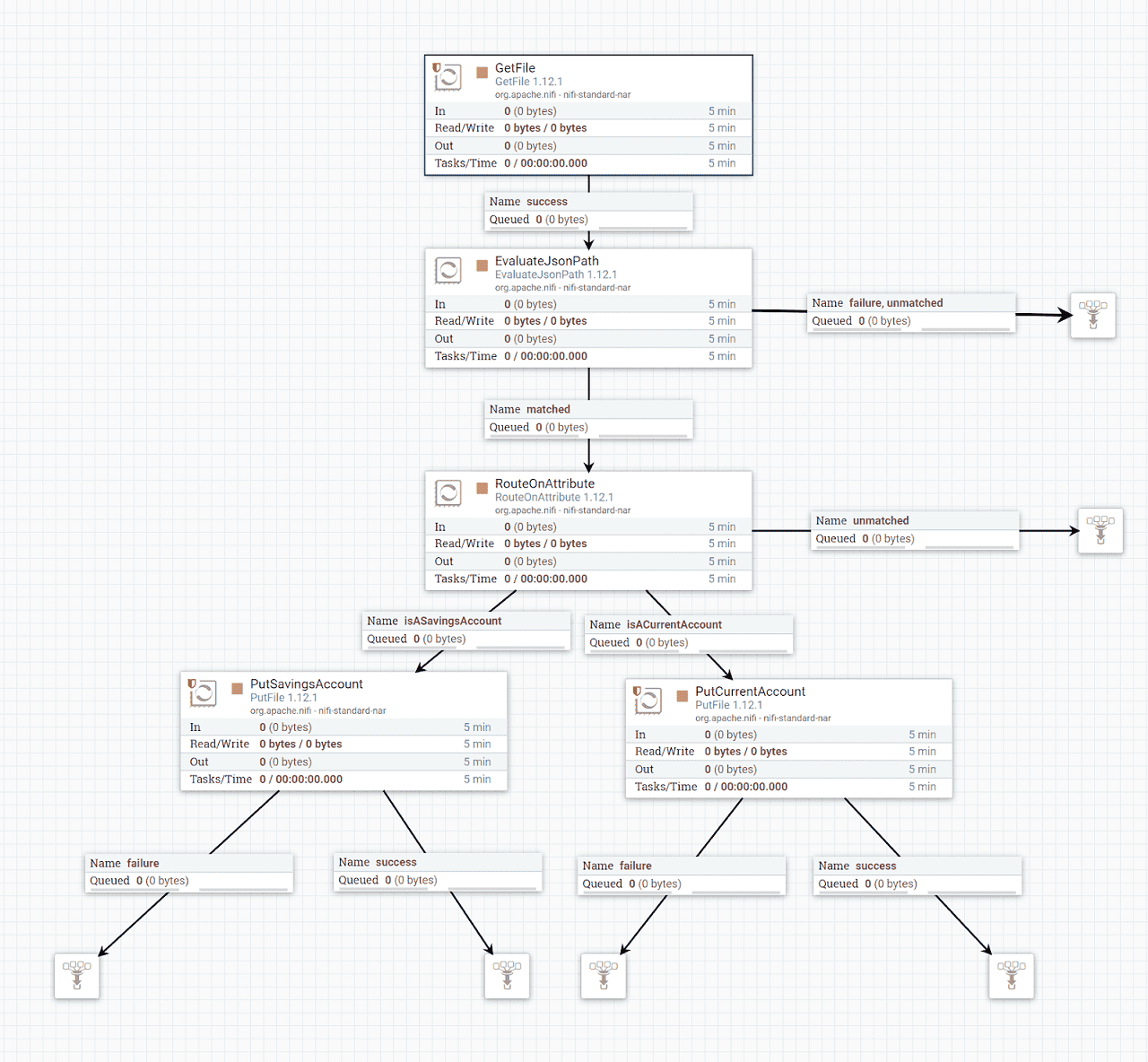 The flow should route the files to the correct directories as seen in the UI:

Check the directories to see that the files have been sorted.

In the examples above, we edited the processor properties to add values directly to the processors, such as the file paths, JSON keys to extract et cetera. Is this always the best approach? What if we had a similar file path that is used in more than one processor?

We can use variables as the values for properties and set this variable elsewhere once which will affect all processors that use the variable. Any processor properties that support the NiFi expression language (You can always check by hovering over the question mark icon next to the property).

We can extract out the base path as it is the same for all of the processors.

Right-click on the canvas and select variables. Add a new variable basePath and set it similar to the following: 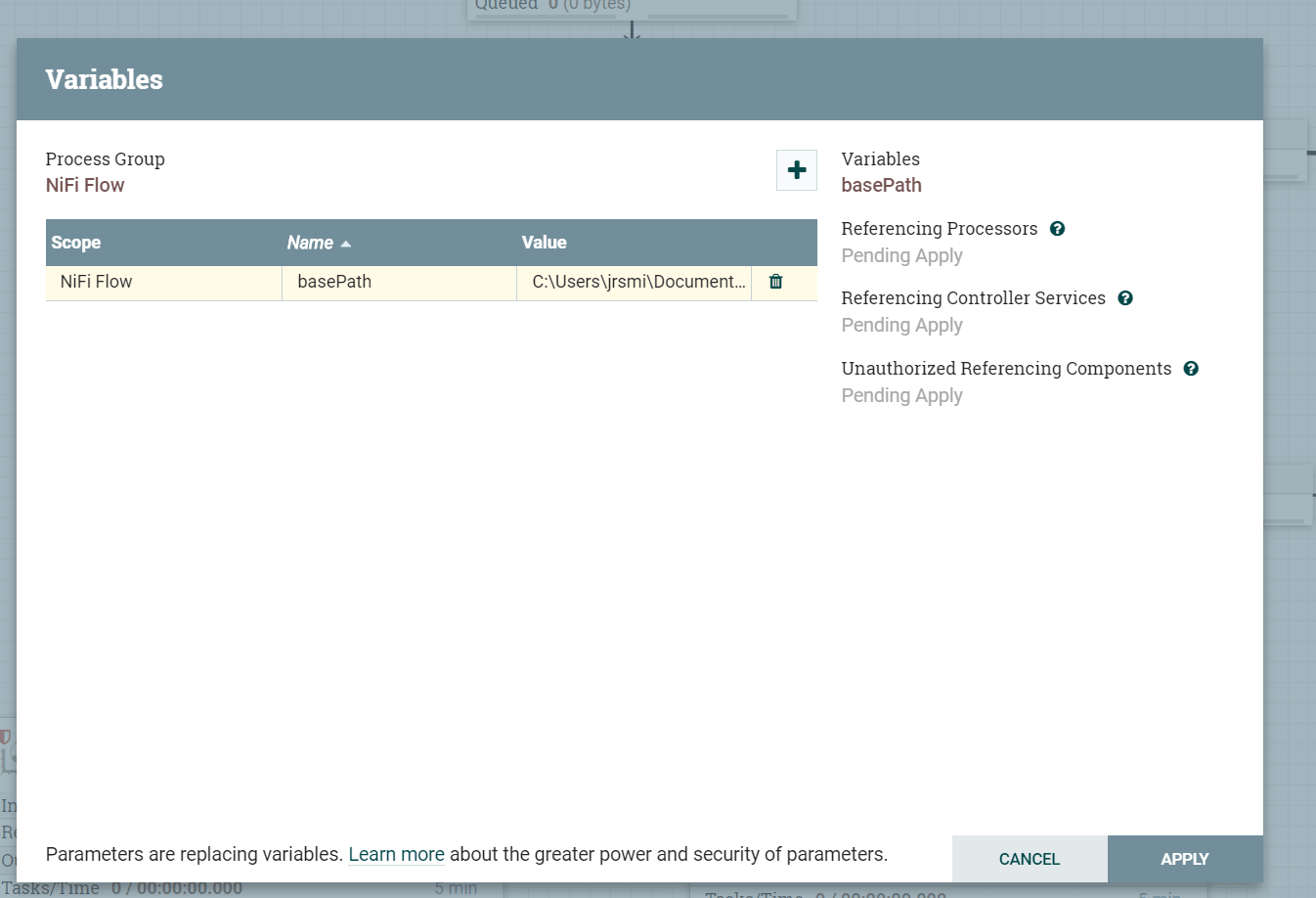 All variables in NiFi are represented using the syntax ${variableName}. The processor properties should look like the following: 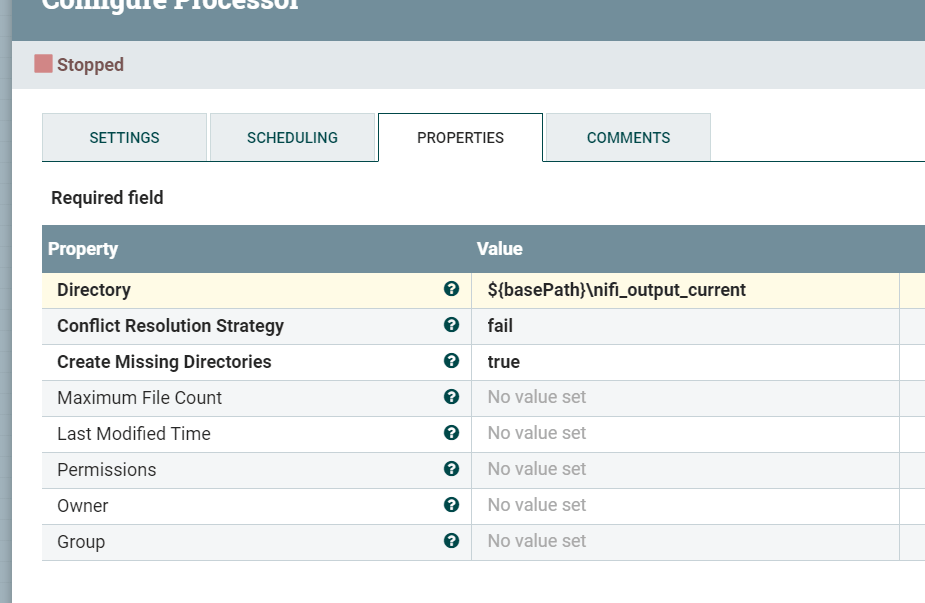 That’s it! Try playing your NiFi flow again and check it still works.

Previously we talked about processors automatically setting Flow File attributes based on a processing operation performed on a Flow File. Flow file attributes can also be set manually by using the UpdateAttribute Processor as part of a flow. This is useful in a number of cases, one of which we can demonstrate by selectively setting the filename in our example flow based on which account route the flow goes down.

Add an UpdateAttribute processor and add a new filename property to the process as per below. 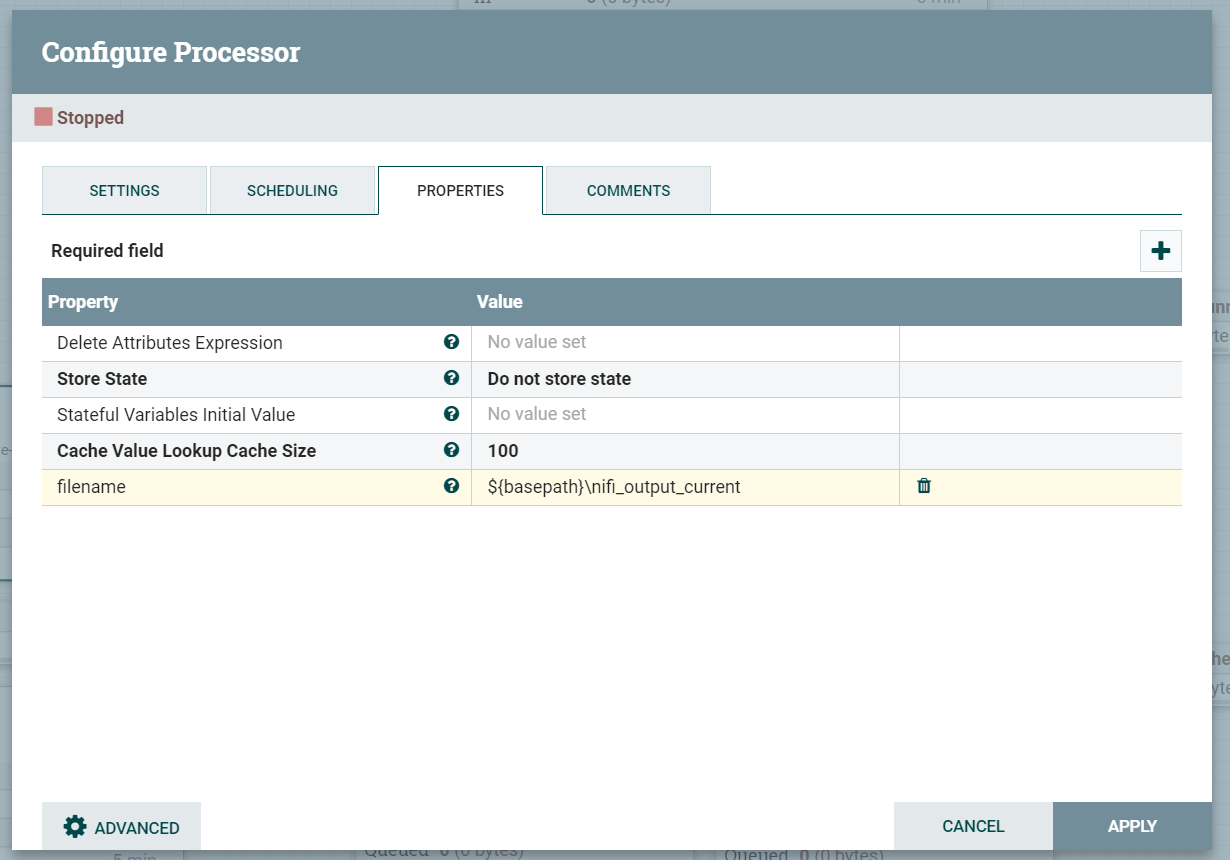 Now add this processor in between the RouteOnAttribute and Putfile processor for the current account.

Change the output directory property of the PutFile processor to simply use ${filename}. The flow will look like the below diagram. 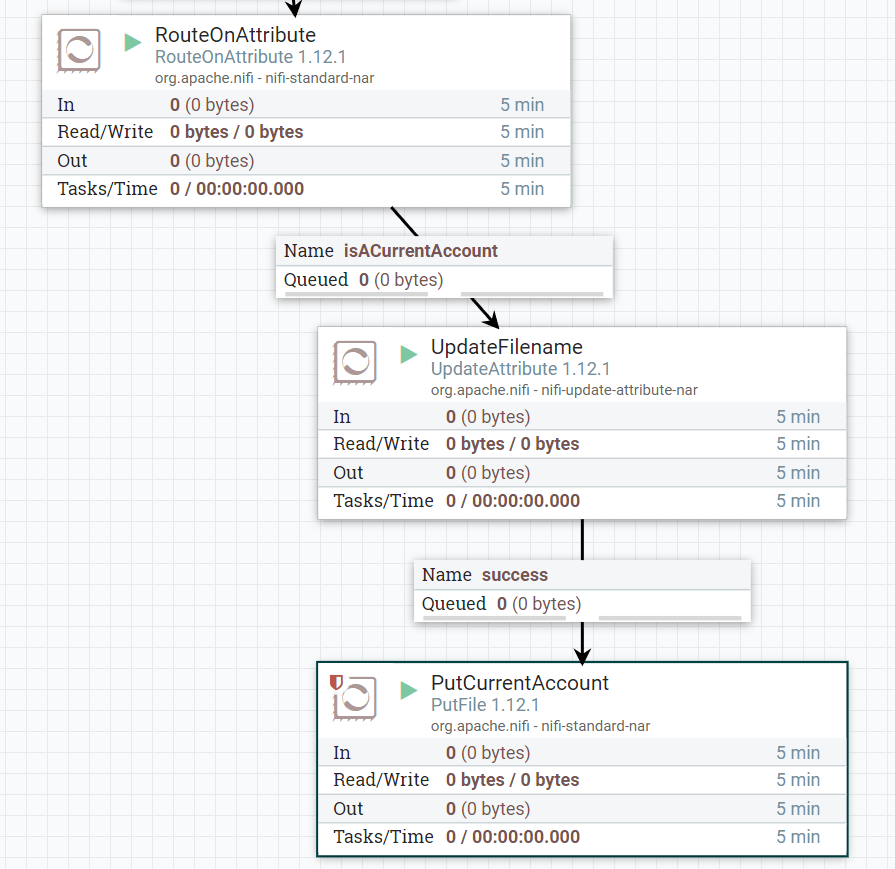 You have now demonstrated the use of setting flow attributes dynamically.

This can be very powerful with certain flow logic, particularly when determining where a flow file originates from and what should happen to it.

The NiFI expression language is a powerful way of adding logic and manipulation into processors in a pseudocode fashion. We have used the NiFi Expression Language a few times already to perform variable substitution and check whether an attribute contains a certain value to perform routing.

NiFi expression language is primarily written in the values of processor properties. The NiFi expression guide can be found at NiFi Expression Language Guide or by right-clicking any processor and selecting the “Usage” option.

A few common examples of function that can be performed using the NiFi Expression Language are: String Manipulation, Maths Operations, If Then Else…. DateTime operations and encoding. Some of these functions will be explored in the next parts of this guide.

This is by no means a list of strict commands you must follow, as your use cases may be different and warrant a slightly different approach, but more of a guidance to ensure some good practices are met when designing flows. 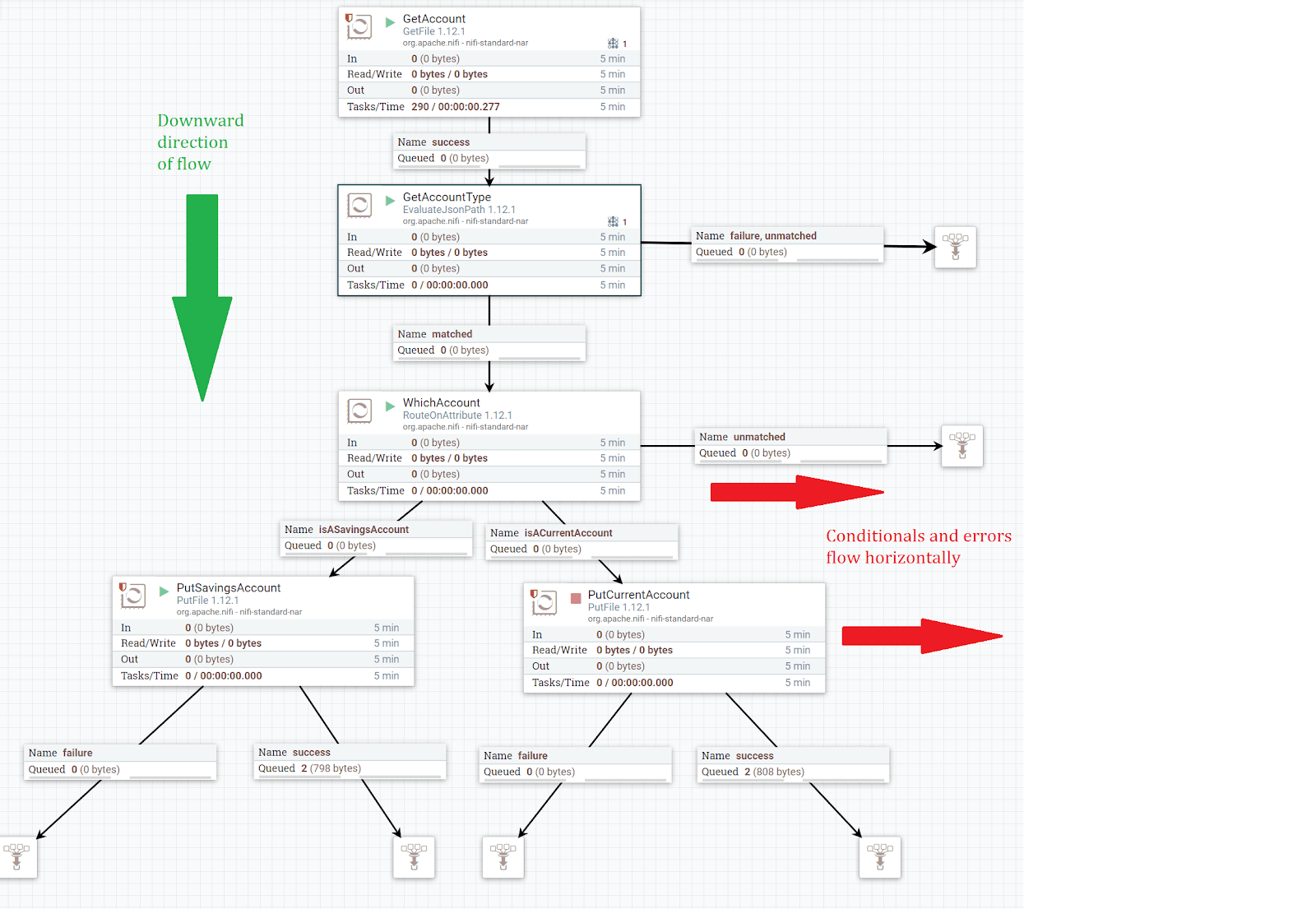 I have seen multiple ways of handling flow file errors - some good, some bad. Here are some of my recommendations to follow.

Use of Variables and Scoping

In Part 2, we will look at securing the NiFi Control UI using certificates and access control roles and groups, posting and reading from REST endpoints, the NiFi registry, additional design patterns, managing source control changes to the NiFi flows and Clustering/High Availability.

Jon has been with Capgemini since March 2019. He is a software developer specialising in Java.